Home » Letter R is for Roll

Letter R is for Roll 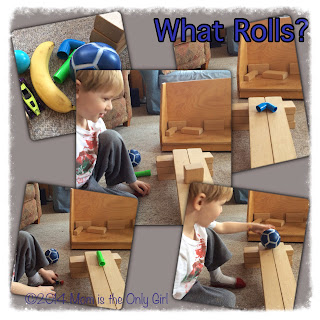 Five year old Sweet Pea and I are still reviewing the alphabet in various ways throughout the week. Letter R was especially fun and lends itself to some experiments! I did, however, remember to include making rainbow milk again! So. Much. Fun. for my kiddos every time we make it!

In the past, our letter R learning was centered around railroads and rainbows. We also did a very short Bible Story concerning the Rich and poor.

This time for a letter R activity Sweet Pea and I tried to discover what does and doesn’t roll and what the objects have in common. This was a really simple experiment to throw together and was fun, so it’s a good one to keep in your ‘rainy day’ arsenal!

Gather your materials – any objects of interest, making sure some will roll, some won’t, and some are cylindrical and some are spherical. (Great vocabulary words, right?)

Set up your experiment area – make a small ramp. We made ours by positioning wood blocks with one end on top of the other, creating a gradual slope.

Pose the question – Will these objects roll down the ramp? Or create a hypothesis about the objects with your child.

Then, have fun experimenting with the objects asking prompting questions during the play.

Activity extensions:
Have discussions about why some objects roll and others don’t.
Come up with a list of what each group has in common.
After we discovered what rolled and tried to roll the objects that didn’t roll a few other ways, Sweet Pea selected toys to try, too!

This was fun for us indoors on a small scale, but if you’d like to integrate gross motor into it, take it outdoors! Last fall we created a small, low ramp outdoors on our driveway with a 2 x 4 (with the 2″ being the height) and a piece of plywood. We tested our outdoor play toys, including rolling a scooter down the ramp (holding it with our hands, not riding it- that wouldn’t be safe!) a whiffle ball, a toy truck, a rock, a tennis racket, chalk, and a bike helmet.

I say this was gross motor, because it required a little more walking and running to get the materials to test, which the boys were happy to do on their own, and to chase after them when they rolled away. I challenged them to try rolling the objects in different ways to see if they could roll if set on the ramp in a different manner.

END_OF_DOCUMENT_TOKEN_TO_BE_REPLACED

What’s on their bedside tables? (Part 2)

*Two books on this list were provided by the publisher in exchange for being mentioned on this blog, but links provided are not affiliate links Sweet Pea, 7 years old and completing first grade, loves for us to read to him, but is starting to read chapter books on his...